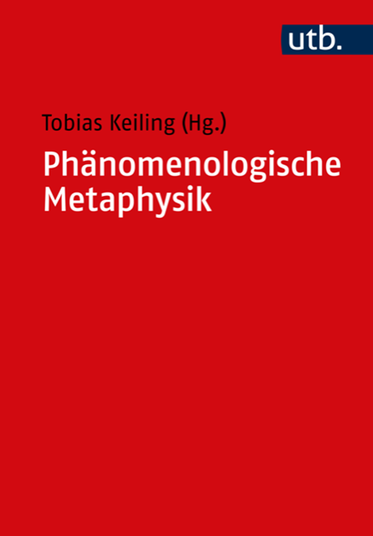 Tobias Keiling received a PhD from Boston College and a Dr. phil. from the University of Freiburg. Now based at the University of Bonn, he is currently a Feodor Lynen-Fellow of the Alexander von Humboldt-Foundation at Somerville College, Oxford University. He was PI of the networking project Phänomenologie und Metaphysik der Welt funded by Deutsche Forschungsgemeinschaft. A few days ago, the volume Phänomenologische Metaphysik. Konturen eines Problems seit Husserl (Phenomenological Metaphysics: Contours of a Problem since Husserl) came out in the UTB book series. He is interviewed by Thomas Arnold, one of the members of the research network and co-author of the introduction to the volume. Many (German) universities hold the book free of charge in their collection of UTB books.

Thomas Arnold: Given that we want this to be a little bit of a teaser for our book, let’s get down to business right away: what is phenomenological metaphysics?

Tobias Keiling: I don’t have a ready answer to that question, though I have grappled with it for a few years now.  Something you very much insisted on when writing the introduction to our book is, I think, vital: there is no unitary meaning to “metaphysics,” and one must pay attention to a particular context and distinguish different respects in which it is used, for instance: does “metaphysics” refer to an area of philosophy or to a specific way of philosophizing?  For me, phenomenological metaphysics is a perspective on questions that have been with us at least since Plato and Aristotle, questions about the true nature of things, the meaning of existence, the place of human beings in the world, about fundamental commitments such as to realism or idealism etc.  These questions have come to determine, in part at least, what we understand by “metaphysics”, and when treating these questions today, it would be naïve to disregard this history.

A. Fair enough. But what is the specifically “phenomenological” take on metaphysics?

K. What is striking about many of the phenomenological authors we present in the volume is that they see the need for some kind of fresh start.  Personally, I think this has much to do with broader 20th century history: the wish to do something new, to be modern, also the feeling that the times require a “renewal” or a “new beginning” of philosophy, as with Husserl and Heidegger.  But already those two have very different ideas about what is wrong with philosophy as it had been done and how the new should look like.  So even if there is a shared motivation to take on a new metaphysics, there is no consenus between phenomenologists on the substantial claims.  One thing the compendium shows is that very different doctrines have been associated with phenomenology.  There is good reason, I think, why the core-group of contributors decided that the sub-title make clear that “phenomenological metaphysics” is the name for a problem and an object of discussion, not that of a positive philosophical agenda.

A. Since you are talking about Heidegger, does he not urge us to “overcome” metaphysics? And have not other phenomenologists also argued against metaphysics as such?

K. You are right, there are authors who hold metaphysics in scant regard, and yet we would like to count them among the phenomenologists: Heidegger, perhaps Derrida.  Levinas argues we should embrace metaphysics but abandon ontology.  Generally, I think the development is similar to that in 20thcentury analytic philosophy, which has worked its way back from Carnap’s suspicion that metaphysics is just nonsense to extended, often very speculative and quite technical debates.  But it have been Continental authors such as Heidegger, Adorno or Foucault that have helped us understand that there are always metaphysical assumptions in the background of what we do, of what we take to be real, etc.  The aim of doing metaphysics, I think, is that we should become able to evaluate our background understanding, which is not the same as to say there is a right set of assumptions to have.  On the contrary, I think metaphysics is a branch of philosophy where it is particularly easy to go wrong.

A. So you are saying that, on one hand, we will always be dealing with metaphysics but phenomenologists, on the other hand, do not have a single idea about how to do so.

K. Roughly, yes.  One thing I have learned over the last years is that there should be no substantial metaphysical commitments written into the definition of phenomenology.  One reason for this is the fact that the history of phenomenology is simply to diverse.  Another reason for me is that I think Husserl is right to insist that phenomenology must be a particular method or way of philosophizing. Because if it is not, you lose the critical stance.  To give you a more recent example: around 2000, there was a debate between Dan Zahavi and Jocelyn Benoist on whether Husserl’s Logical Investigations and phenomenology in general are “metaphysically neutral.”  There is still no agreement on that question, and you might find that disappointing.  I don’t.  Being “metaphysically neutral” is something different than being “metaphysically blind” or “metaphysically deaf,” and that is what is to be avoided at all cost. That we are still debating these issues for means that they still matter to phenomenologists, and I think they should.  The crucial mistake is to want to end the debate.

A. I am very much on board with this concept of metaphysical plurality and flexibility – as long as it does not become arbitrary. The new volume is the result of a DFG funded network of young researchers you managed to install. Can you explain a little what the guiding idea (the Leitfaden, so to speak) behind the whole project was?

K. There were actually two goals that have been equally important.  One goal was to present an overview of the discussion from Husserl to the present.  We cover 21 different authors in the book, Lázló Tengelyi being the most recent when you order them by date of birth.  The problem with such a setup, however, is that if you present each author separately, you don’t immediately see what discussions and problems connect them.  Hence the second goal: to go beyond doxography.  Our strategy for achieving this in the making of the volume was that we met over the course of seveal years with the core-group of authors to discuss chapter drafts. The book emerges as the result of these longer discussions.  In writing the chapters, there were also certain requirements for the contributors: each chapter should present what an author has to say on metaphysical debates and concepts, that goes without saying. But each chapter now begins with a discussion of the notion of the “world” and it closes with a discussion of the notion of metaphysics that is articulated or implied by the work of an author.  So you can actually take the volume and read it sideways, as it were, concentrating on these passages.  And let me reiterate how thankful I am that contributors were willing to engage with this particular design for the volume.

A. In a sense, there is a vertical (chronological) order as well as a horizontal (thematic) order to the book, since some topics like realism vs. idealism, ontology, theology, metaphysics or indeed “world” show up in every chapter in one way or another. While I think it is fairly obvious why the notion of metaphysics a phenomenologist uses should be included in a volume of this title, especially given what you said about the diversity of approaches, it is not necessarily self-evident why a discussion of “world” should be.

K. No, that was the hypothesis I wanted to test in this project: that phenomenologists typically discuss problems associated with metaphysics with the help of or with regard to the notion of “world”.  There are exceptions, no doubt, but it is striking that this is a problem for Husserl, for which the world is the “universal horizon” and yet is, paradoxically, “open”; Heidegger famously talks about “being-in-the-world”, Merleau-Ponty about the “flesh of the world”; Fink explicitly discusses the “world problem”; Tengelyi’s magnum opus is entitled Welt und Unendlichkeit, World and Infinity.  This brought me to the idea that “world” could serve as a kind of hermeneutic key to interpreting and relating phenomenological authors.

A. Now that work on the volume is finished: do you reckon this strategy has proven its value?

K. I recall heated discussions of that question.  Its for our readers to judge whether the design of the volume is working.  It certainly helped me to understand debates in phenomenology better and the question gave the volume more structure than a typical handbook or a collection of essays would have had—and it was much more work to complete. But what I find interesting is that phenomenologists grapple with the notion of “world” while it is rarely at the center of attention in other branches of philosophy.  Strawson, for instance, defines “revisionary metaphysics” as the attempt to develop better structures for thinking about the world, in contrast to “descriptive metaphysics”, which describes the structures we simply have. But what is this “world” grasped in thought? Tell me more.

A. Since you mention other discourses, do you see a way in which focusing on metaphysical issues (or metaphysics as an issue in and of itself) allows to connect phenomenology to other enterprises dealing with such matters? After all, despite the fact that phenomenologists seem to thematise the world more than others, topics like the realism-idealism-divide, ontology and theology appear to be themes common to both phenomenological and non-phenomenological debates.

Generally, yes, although each of these debates is extended and one has to be very careful about how a problem is framed and how terminology is used.  I wrote my dissertation on realism in later Heidegger, and I can tell you that many different views go under that label.  If done right, however, I think it is very promising to bring phenomenology back into the discussion.  For example, Kris McDaniel has done interesting work on ontological pluralism relating and contrasting Heidegger’s Being and Time to Ted Sider’s influential ontology.  My hope is that the volume that is now coming out will allow more work of this kind in the domain of metaphysics.  Both its history and present in phenomenology offer a number of good starting points.